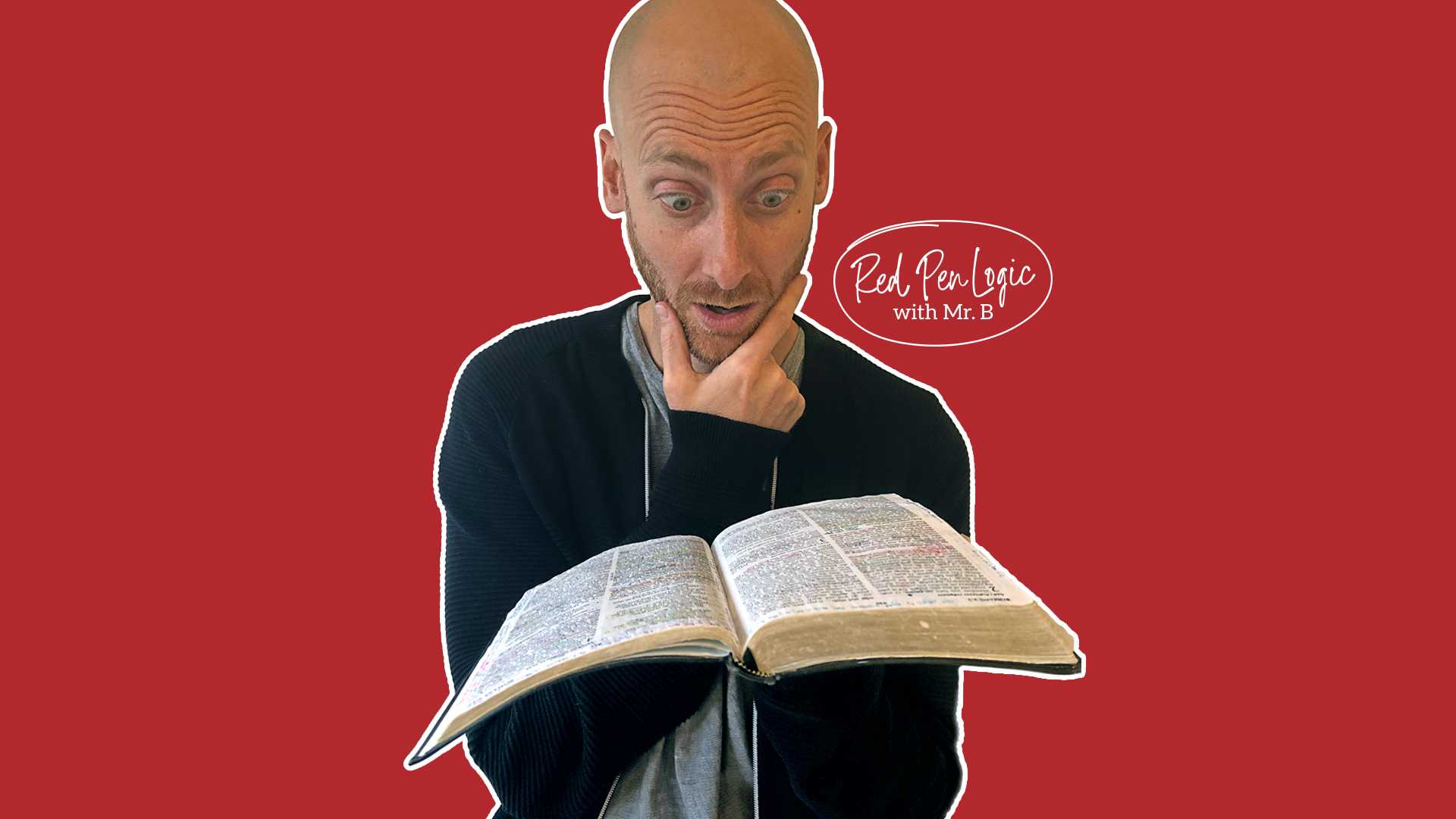 The Bible Doesn’t Say What He Thinks It Says 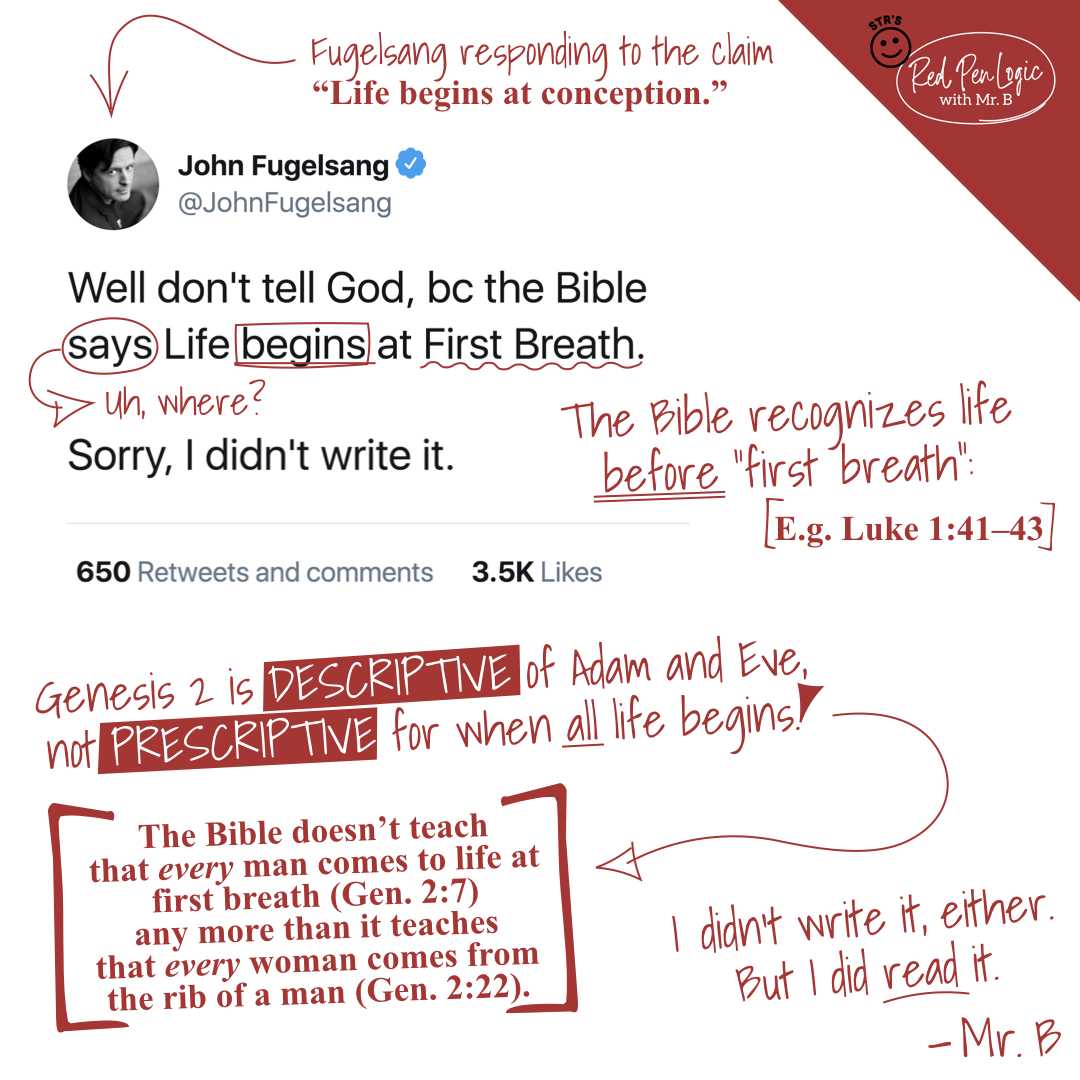 John Fugelsang attempts to show a contradiction between what the pro-life Christian believes (“life begins at conception”) and what he thinks the Bible teaches (“life begins at first breath”). There’s a problem, though. It does not say life begins at “first breath.” It says God breathed into Adam after forming him from dust, and he came to life. Genesis 2 is describing a special act involving a special couple. It’s not teaching when every human being comes to life.

There’s a second problem. The Bible clearly recognizes personal human life before first breath. The clear example is how Luke describes Jesus and John the Baptist before either took their first breath.

But even if the Bible didn’t explicitly state when life begins, so what? The science of embryology is clear: Human life begins at conception. And this is perfectly consistent with Scripture.

This is Red Pen Logic with Mr. B, where we help you assess bad thinking by using good thinking. And we have a lot of fun while we’re doing it.

Fugelsang doesn’t give us any Bible references to show that the Bible says life begins at first breath, but I think it’s safe to assume that he’s referring to the account of the creation of Adam and Eve in Genesis 2. But if that’s the case, we have a problem. Because the Bible doesn’t teach there that life begins at first breath. Fugelsang needs to take a closer look at his Bible. It says that God breathed into Adam, and Adam came to life (Genesis 2:7). So the author of Genesis is describing what God did in the unique circumstance of the creation of man and woman. He’s not telling us how all human beings come to life. The Bible doesn’t teach that every man comes to life at first breath any more than it teaches that every woman comes from the rib of a man. This was a special case. It only applied to the man made out of mud.

Fugelsang is guilty of taking a descriptive account of Adam and Eve’s unique creation and making it a prescriptive rule for when all life begins. If we want to know what the Bible teaches about when life begins, we’re going to have to look elsewhere. And when we do, we find the Bible consistently elevates the status of unborn humans to valuable individuals. In other words, the Bible recognizes personal life before first breath. That includes this passage from Psalm 139:13: “You formed my inward parts; you knitted me together in my mother’s womb.” The Bible affirms that we exist in the womb as ourselves before we’re born.

And Luke makes the exact same point the psalmist makes. In Luke 1:41–44, he records—get this—a pre-birth interaction between Jesus and John the Baptist that tells us exactly what the biblical view is. When John is in the presence of Jesus, he’s filled with the Holy Spirit and leaps for joy. Why is this significant? Because this happens when John is a second trimester fetus and Jesus is a first trimester embryo. And by the way, embryos and fetuses don’t breathe. The text makes it very clear that Jesus and John the Baptist were living human beings before either took their first breath.

Now someone might say, “Well, Tim, the Bible never explicitly says that life begins at conception.” That’s true. Science does. The medical text book The Developing Human: Clinically Oriented Embryology says, “Human development begins at fertilization.... This highly specialized, totipotent cell marked the beginning of each of us as a unique individual.” And the medical textbook titled Before We are Born says, “Embryology is concerned with the origin and development of a human being from zygote to birth.” And near the end of the same book, the authors say, “There are different opinions of when an embryo becomes a human being because opinions are often affected by religious and personal views. The scientific answer is that the embryo is a human being from the time of fertilization because of its human chromosomal constitution. The zygote is the beginning of a developing human.”

So, what have we learned? First, John Fugelsang is just mistaken about what the Bible says. It does not say that all life begins at first breath. It says that God breathed into Adam after forming him from the dust, and he came to life. Genesis 2 is describing a special act involving a special couple.

Sorry, I didn’t write it either, John. But I did read it. Class dismissed.