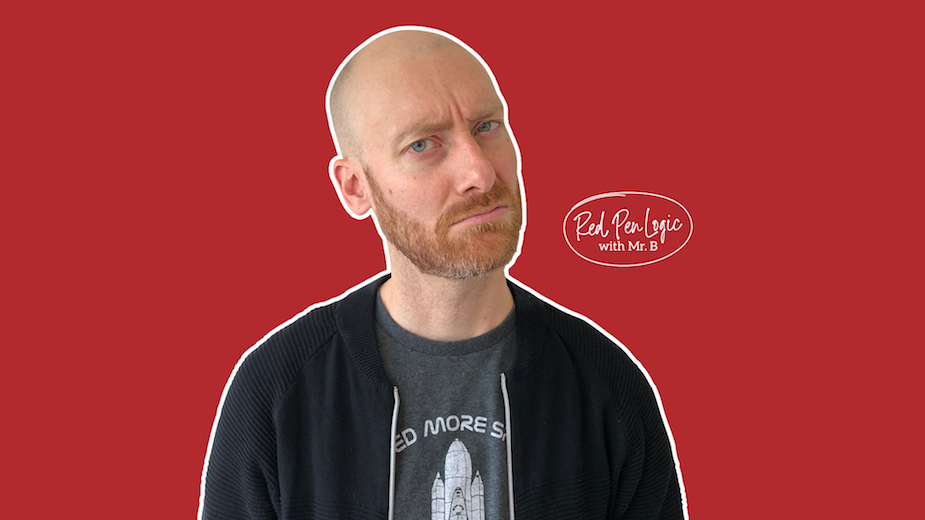 Should Religious People Legislate Their Beliefs? 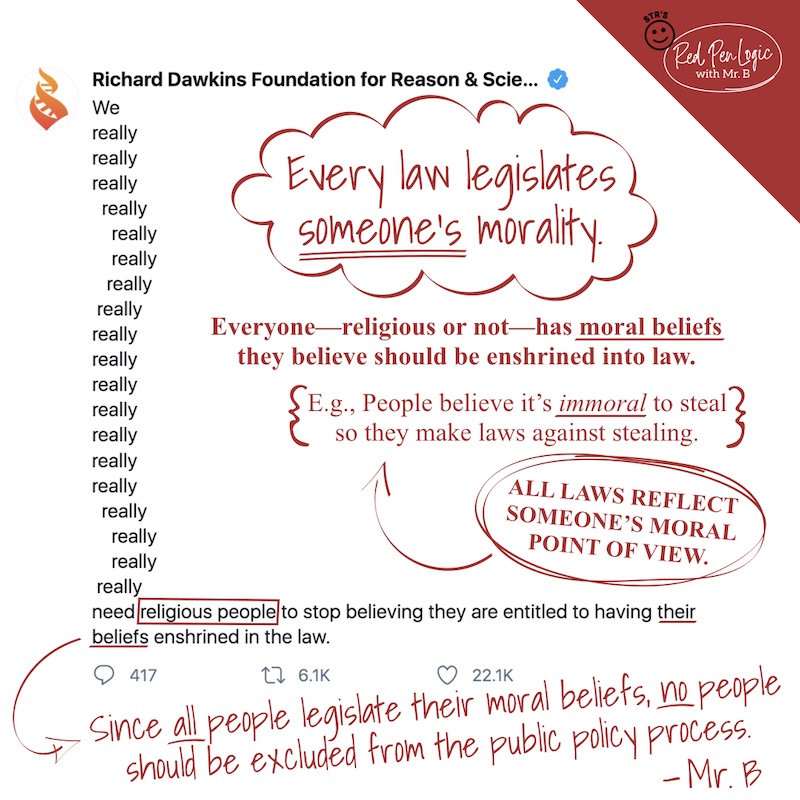 The Richard Dawkins Foundation wants to disqualify religious people from enshrining their beliefs in law. But this fails for two reasons. First, you can’t prohibit someone from legislating their moral beliefs since all laws legislate someone’s moral beliefs. That’s how the legislative process works.

Hey, religious person. Yeah, I’m talking to you. You’re welcome to your beliefs, but don’t even think about trying to bring your beliefs into the public square. Your beliefs are not allowed.

This is Red Pen Logic with Mr. B, where we help you assess bad thinking by using good thinking. Plus, we try to have some fun while we’re doing it. In today’s tweet, Richard Dawkins Foundation for Reason and Science offers a tweet—ironically, with little reason and no science.

According to the Dawkins Foundation, religious people should be disqualified from having their beliefs influence public policy. But with religious people excluded, who then gets to participate in the political process? Non-religious people like Richard Dawkins, perhaps? Well, that’s convenient. This kind of thinking isn’t just wrong, it’s dangerous. But don’t worry, danger is my middle name. (Actually, it’s Edward.)

The Dawkins Foundation wants to exclude religious people from enshrining their beliefs in the law. This thinking fails for two reasons. Here’s the first reason: All laws legislate someone’s moral beliefs. Each word in that sentence is important. Everyone has beliefs—things they hold to be true. I have beliefs, you have beliefs, and Dawkins has beliefs. I believe I have a beard. I don’t know if you’ve noticed. I believe I have a Morkiepoo who is super adorable. (Ah, so cute.) And I believe stealing my Morkiepoo is wrong. (Isn’t that right, Polly?)

In other words, stealing is illegal because it’s immoral. All legitimate laws are grounded in some moral belief some person holds. Without moral grounding, laws would simply be exercises in power, and that’s not right.

For example, murder laws are good because they’re based in the belief that it’s wrong to intentionally kill innocent human beings. Every law reflects someone’s moral point of view. So, the question then isn’t, “Should we legislate moral beliefs?” but rather, “Whose moral beliefs should we legislate?” So, everyone has moral beliefs they think should be enshrined in the law, as Dawkins puts it, not just religious people. So, why does Dawkins single out religious people, saying their beliefs should be disqualified? This leads to the second reason why this tweet fails.

Now, you might be thinking, what about laws against abortion or against same-sex marriage? Aren’t these examples of legislating a religious belief? No. Here’s why.

The argument against abortion isn’t based on religion. It’s based on moral common sense. It is wrong to kill an innocent human being, and pro-lifers point to science and philosophy, not religion, to point out that abortion kills an innocent human being. Therefore, abortion is wrong. Likewise, arguments for traditional marriage can be made without quoting chapter and verse. Remember, just because a religious person holds a belief doesn’t mean it’s merely a religious belief.

So, what have we learned? The Dawkins Foundation wants to exclude religious people from enshrining their beliefs in the law. This fails for two reasons. First, you can’t prohibit someone from legislating their moral beliefs since all laws legislate someone’s moral beliefs. That’s how the legislative process works.

Second, not all beliefs held by religious people are religious beliefs. This distinction is really important because some want to label a belief as religious just so they can reject it. (I’m looking at you, Dawkins.)

As it turns out, no one is trying to legislate strictly religious beliefs, and the examples that are typically given are held with equal confidence by non-religious people. Since all people legislate their moral beliefs, no people—religious or non-religious, black or white, gay or straight, with hair or without—should be excluded from the public policy process. Class dismissed.