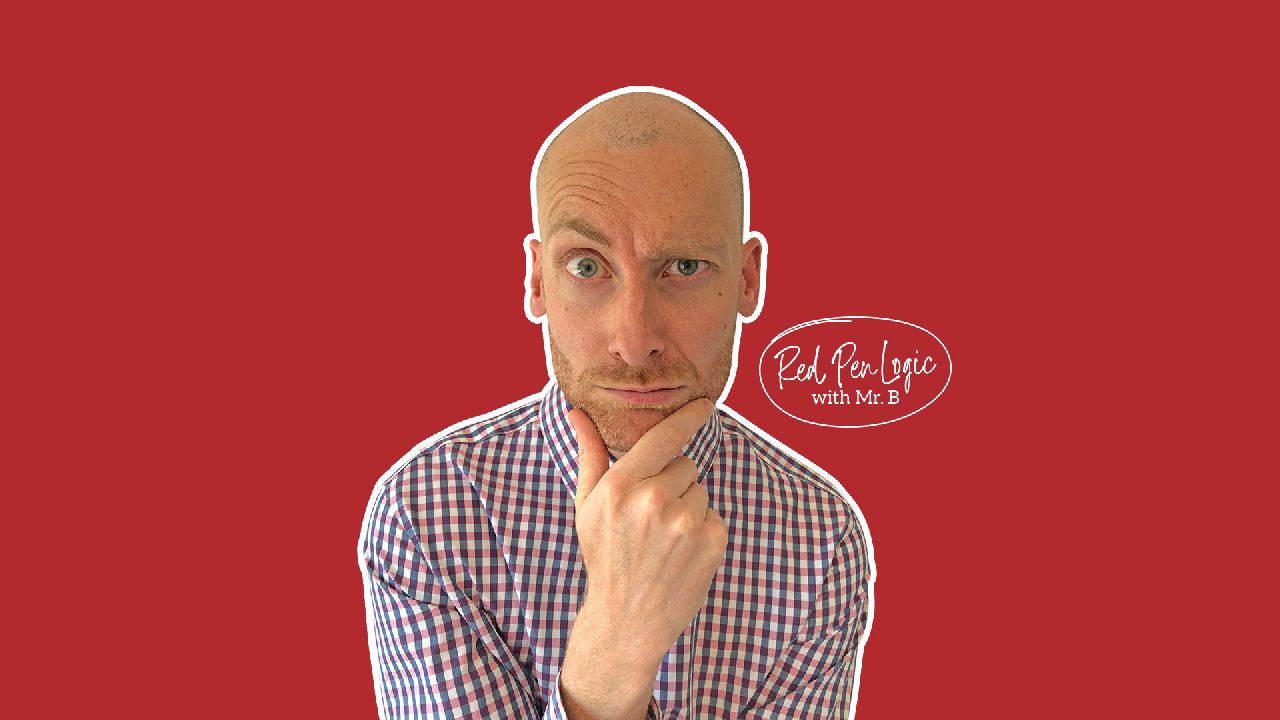 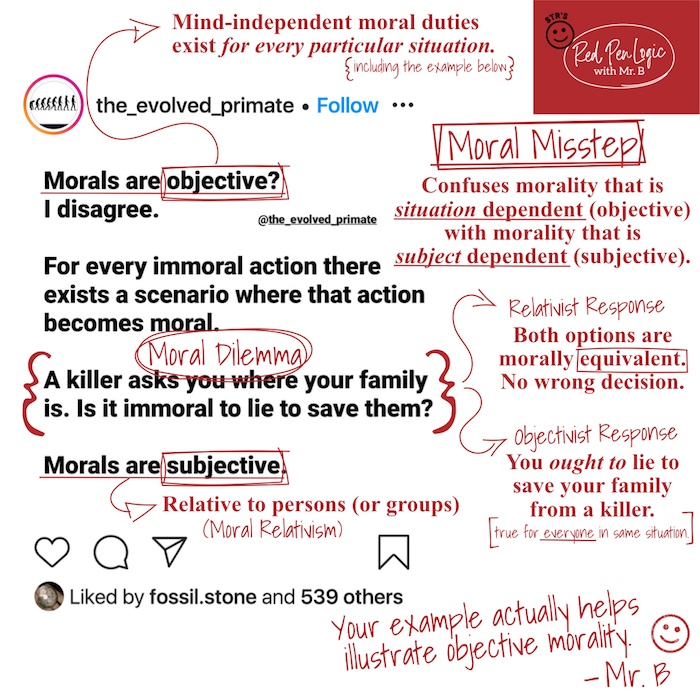 Second, moral dilemmas based on the circumstances (as in Mr. Primate’s example) always demonstrate objectivism, not subjectivism.

Third, if it’s true that we ought to lie to save our family from a killer, then morality is objective, not subjective.

The Evolved Primate thinks his ethical dilemma illustrates subjective morality. Ironically, it illustrates just the opposite.

Morality that’s relative to circumstances is not moral relativism.

Hi, I’m Tim Barnett, and today we’re applying some red pen logic to an Instagram post from The Evolved Primate. Class is in session.

This is Red Pen Logic with Mr. B, where we help you assess bad thinking by using good thinking. Plus, we try to have some fun in the process. In today’s example, The Evolved Primate offers an argument against objective morality and for subjective morality. The post reads, “Morals are objective? I disagree. For every immoral action there exists a scenario where that action becomes moral. A killer asks you where your family is. Is it immoral to lie to save them? Morals are subjective.” Notice the logic: If morality is dependent on the situation, then morality must be subjective. All right, it’s time to red pen this primate.

The Evolved Primate seems a bit puzzled on what it means for morality to be subjective, so let’s define some terms. (Pay very close attention here because lots of little primates get confused on this.) Subjective morality, also called relativism, is the view that morality is based on what some particular person believes. On this view, what is right and what is wrong depend completely on the individual, or the subject. That’s why they call it subjectivism. On relativism, premarital sex may be wrong for me, but the exact same behavior might be right for someone else.

The Evolved Primate’s example actually demonstrates his mistake. He offers a moral dilemma in the form of a question. A killer asks you where your family is. Is it immoral to lie to save them? The dilemma is, if you tell the truth, your family will be killed. Bad. But if you protect your family, you’ll have to lie. Also bad.

But wait. If morals are subjective, as Mr. Primate says, then there is no dilemma. The answer to the question is simple. If you think it’s immoral to lie, then it is. For you. If you think it’s more moral to protect your family, then it is. For you. There is no dilemma on relativism because whatever you choose is right for you. For the moral relativist, both options are equally legitimate because there is no objective right or wrong decision.

For the moral objectivist, though, there is a right response and a wrong response in this particular situation. Yes, it’s wrong to lie to protect a thief from the police. But it’s right to lie to protect your family from a killer, and this is true for anyone facing the same situation. In subjectivism, the subject gets to decide what’s right and wrong, and he’s always right, by definition. In objectivism, it’s the objective circumstances that determine what’s right and wrong. See the difference?

So, what have we learned? First, objective morality always depends on the situation or circumstances. Relativism is when right and wrong depend on, or are relative to, the person.

Second, moral dilemmas based on circumstances, like the example given by Mr. Primate, always demonstrate objectivism, not subjectivism.

Third, if we ought to save our family from a killer, then morality is objective, not subjective. The Evolved Primate thinks his ethical dilemma illustrates subjective morality. Ironically, it illustrates just the opposite. Class dismissed.