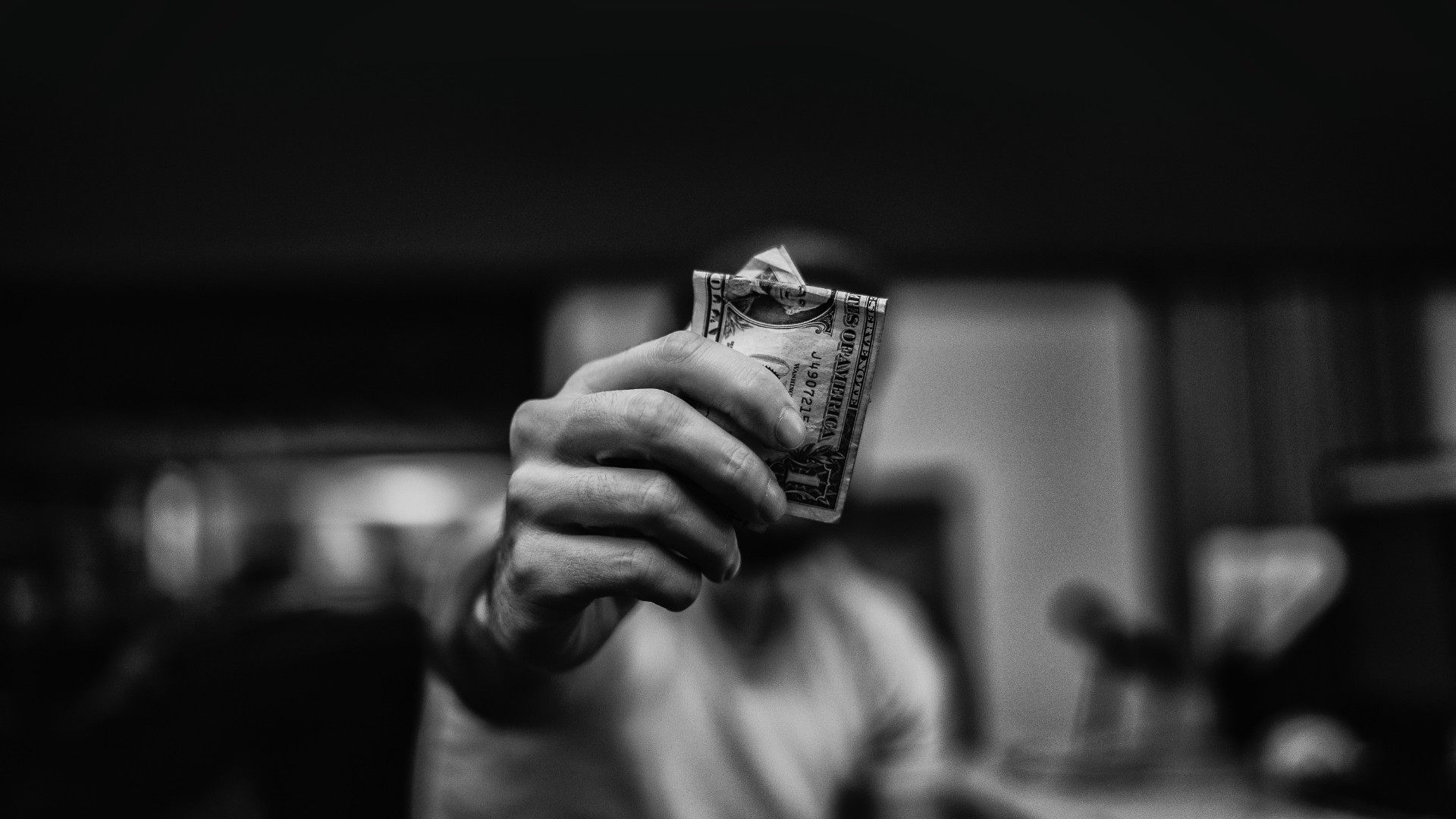 Christians shouldn’t “tithe,” Greg argues. This O.T. legal obligation has been replaced by the New Testament moral obligation to give...and with a smile on your face.

There is an obvious disjunction in the Scripture between the Old Covenant period and the New Covenant Period. I’m not referring to the division between Malachi and Matthew. That’s merely a textual division. Jesus’ entire life was lived under an Old covenant system even though the events of His life are recorded in the New Testament. Jesus initiated the New Covenant at the end of His life at the Last Supper, but it wasn’t until Pentecost that it began in force. The theological disjunction, then, is pre-Pentecost and post-Pentecost, not Old and New Testament.

This doesn’t justify throwing out the entire Old Testament. Rather, it informs our hermeneutic so that when we look at the Scripture we have to ask if our interpretation needs to take this disjunction into consideration. Are there some teachings, precepts, or promises that are strictly Old Covenant—meant for pre-Pentecost Israel—and are not meant to be directly applied to the Church today?

For example, the dietary laws of the Old Testament, the worship liturgy of ancient Israel, the animal sacrifice system etc. are obviously changed. The enduring moral precepts, however, have been repeated in the New Testament writings—that is, in Acts and the Epistles—and are still in force, though they serve a somewhat different function.

What about tithing? Is the tithe meant to be applied to post-Pentecost, New Testament Gentile believers? Clearly the tithe—the moral obligation to give one-tenth of one’s income—was an important part of the Mosaic Law given to Israel for specific purposes. Does it apply to the Church?

I think not, for a couple of reasons. First, virtually all of the support for the idea of New Testament Christian tithing comes from the Hebrew Scriptures in the context of the Old Covenant Law, not the New Covenant. Tithing was for Jew under Moses in a theocracy, not for Gentiles in the church. The Jerusalem Council in Acts 15 made it clear that the burden of the Mosaic Law that was distinctly Jewish in nature should not be laid on the shoulders of the Gentile believers.

One rejoinder to my assessment is that the New Testament actually does teach the obligation of tithing. In Matthew 23:23 Jesus says, “Woe to you scribes and Pharisees, hypocrites, for you tithe mint, dill, and cumin and have neglected the weightier provisions of the law: justice, mercy and faithfulness. But these are the things you should have done without neglecting the others.”

This seems to be a clear statement from Jesus that justice, mercy, faithfulness and tithing are all to be practiced by believers. This amounts to a direct command by Jesus to the church to tithe.

A closer look shows this won’t work, though. Jesus’ remarks occur before Pentecost. He was simply reinforcing the teaching of the Mosaic Law already incumbent on the Jews in virtue of the fact that the Old Testament economy was still in force.

I’m not just making this up. You’ll notice that virtually all of Matthew 23 consists of the words of Jesus. He is giving a continuous discourse to the Jews, including His comments on tithing in verse 23. Look closely at the beginning of the chapter, at the beginning of this very same discourse. In verse 2 Jesus says, “The scribes and the Pharisees have seated themselves in the chair of Moses. Therefore, all that they tell you, do and observe.”

Now here’s my question. When Jesus starts out a discourse giving the command that the listeners ought to do and observe everything that the scribes and Pharisees tell them by the authority of the “chair of Moses,” is that command appropriate in a New Testament, post-Pentecostal context? The answer is clearly “no.” We’re not obliged to obey everything that the scribes and the Pharisees told the Jews to obey regarding the Law of Moses. We’re in a new system.

If verses 2 and 3 don’t apply to the New Testament Christian, then Verse 23, which makes the comment about tithing—another part of the Mosaic Law—seems to me to be suspect also. It’s part of that larger discourse that is in an Old Testament context.

My point is that simply because Jesus commands tithing in this verse is not enough to show that Christians ought to tithe in the Church. One must give further New Testament justification, and none is forthcoming.

It doesn’t mean that nothing in the discourse is useful in New Testament sense. Certainly much of it is. But with regard to commands, it’s appropriate to ask whether these commands are necessarily part of the Old Testament context and don’t apply to the post-Pentecostal context. Jews were to tithe and be just, faithful and merciful. Christians are commanded in other contexts to be just, faithful and merciful, but are not similarly commanded to tithe.

The second reason I don’t think tithing is a rule for the church is that, when you look closely at the tithe of the Hebrews, it wasn’t just ten percent. It was closer to 30 percent, because the tithe was given at different times of the year and for different purposes, sometimes for the priests and sometimes for the government. Actually, the priesthood and the machinery of government were tightly interwoven. One could almost think of the tithe as a civic tax, to some degree. If the OT law on tithing applies with equal force to Gentile Christians as to Old Testament Jews, then multiple tithes are required, not just the one-time 10%.

Third, the New Covenant teaching of Paul appears to replace the Old Testament tithe with a different directive. The new ethic explicitly states that we are not under obligation or under compulsion, but rather to give cheerfully as we purpose in our own hearts. 2 Corinthians 9:7 says God loves a cheerful giver. God is able to prosper us, but we are to set aside what we determine in our own hearts to give.

Instead of a legal requirement to tithe, we are offered the opportunity to give. One can decide for himself whether he should give five percent, 10 percent, or 15 percent. It’s up to him, according to whatever he has purposed in his own heart as God has prospered him.

To put it in a very straightforward way, there is no moral obligation in the New Testament to give ten percent of one’s income regardless of the circumstances. That was a provision given to Israel under the theocracy that is not repeated in the New Testament itself but, in fact, is replaced by a new ethic that we see in 2 Corinthians, chapters 6–8.

To whom should we give? Follow the guideline in Galatians 6:6. It says, “Let the one who is taught the word share all good things with him who teaches.” We have a moral obligation to support financially those people or institutions that are feeding us spiritually. For most people that would be the local church. For those who get their primary feeding from a “parachurch” organization, though, that group should be the main object of their giving. Keep in mind, even Christian organizations are part of the church in the New Testament sense.

Generally as a first order of priority, financially support the work of the local church that’s feeding you on a regular basis. However, there is full legitimacy to helping other organizations that are also feeding you: Stand to Reason, CRI, Focus on the Family, or whatever. If you’re getting fed there, then it’s fair and good—and also consistent with Paul’s teaching—for you to support those organizations financially.

There is a different category of giving that might be called a charitable offering—kicking in some cash to send someone to the mission field, etc. In this case you’re not giving back financially to those who have been giving to you spiritually, but rather you’re offering help unilaterally. That’s a separate category.

When I give money to my church, I consider these offerings—gifts for food programs for the homeless, or for women in crisis pregnancy, etc.—as separate from my regular giving to advance the mission of the church that has been feeding me spiritually. I count them as charitable gifts, not as direct giving to my church. That should come first.

Is the Leviticus Prohibition of Homosexuality Irrelevant?