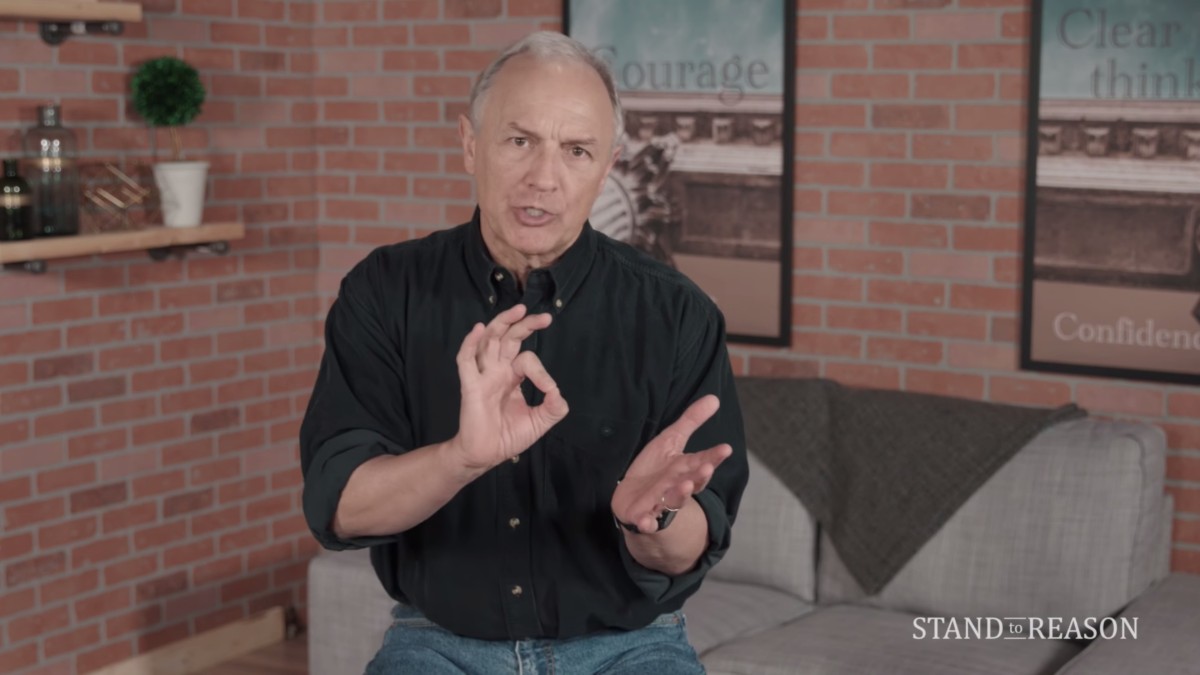 The Witch in Wisconsin

Greg shares how to use tactics to make a case for life.

I’d like to give you an illustration to show the power of the tactical approach and also the power of of aiming to just try to put a stone in someone’s shoe. It’s something that happened to me a number of years ago. I was in northern Wisconsin, I was up there at a place that my grandfather bought many years ago in a lake and when I was a kid I used to go up there fishing and now I bring my own daughters up there. I love to fish. I love to bass fish.

I only get a couple of weeks out of the year to do it anymore but when I’m up in Northern Wisconsin like I go small mouth fishing and I caught the largest small mouth bass in my life at the time with a local pastor. It was just a bit over four pounds. I’ve caught eight fish over 5 pounds since then so I’ve increased my bragging rights but I was so proud of that fish. I wanted to take a picture of it and he took a snap of it and I wanted to take it and get it digitally converted so I can put it up on the screen at the his church where I was going to be speaking the following weekend and kind of flex my fishing muscle.

So my wife and I took the film in and we dropped it off and the young lady that was helping us at the counter, she had a large pentagram hanging from her neck. Now a pentagram is a five-pointed star that is often an occultic symbol. It was an opportunity for me to ask about that. I said, “Does that jewelry have religious significance?” And she immediately said, “Yes it does. The five points of the star stand for earth, wind, fire, water, and spirit.”

Now this was familiar to me, with just my own training and background, but I wanted to get more detail. I asked her, “Does that have religious significance for you personally.” You know some people wear a cross and it doesn’t mean anything. It’s just jewelry. That’s what I wanted to know about her particular piece of jewelry. She said, “Yes it does have significance. I’m a pagan.”

Now when she said that look, I’m a trained professional. I was just taking it in stride, but it caught my wife by surprise and she started to laugh when the gal call herself a pagan. And then she caught herself and she said, “I’m sorry I didn’t mean to be rude but I never heard anybody admit it before.” She’d only heard the word pagan when her girlfriends would call their kids in. You know, get in here you bunch of pagans. That kind of thing.

And now the woman wasn’t offended. She explained that this was an earth religion and as she’s talking about it, I realize I’m talking to a witch. And in fact I asked her that. “Are you Wicken?” and she said, “Yes I am.” We respect all life. A major tenet of Wicca. And so I’m thinking about it and so I asked her, “Well that would probably make you pro-life then wouldn’t it, regarding the abortion issue?” and she said, “No actually I’m pro-choice.” I said, “Isn’t it odd for a witch to be pro-choice? My understanding is that they’re mostly pro-life, because of their views?” and she said, “Well yeah, it is a little bit odd.” And then she qualified her statement she said, “I know that I could never do that. I could never kill a baby.” Referring to abortion.

Look, at Stand to Reason we have training material on how to deal with the abortion issue. It’s called, Making Abortion Unthinkable—The Art of Pro-Life Persuasion. And we give arguments, philosophical and scientific, to show that abortion takes the life of an innocent human child, without proper justification. Baby-killing, if you like, but we don’t encourage people to use that language, because we don’t want anyone to think that we’re trying to make our points based on slick rhetoric.

But in this case, it’s not me the pro-lifer who’s calling abortion baby-killing. It’s the person who believes in abortion who is actually calling abortion baby-killing. And I hope you get one thing out of this illustration and that is the importance of listening to what the other person says when you’re in a conversation. Because people are going to give you things all the time that you can use to make your points more effectively and she has just given me, in a certain sense, the authority to identify abortion for what it is: taking the life of an innocent human being. Baby-killing, if you will. And so consequently I’m not going to use the word abortion anymore. In this conversation, I’m going to be using her term in the conversation.

She said, “I know I could never do that I could never kill a baby.” And then she gave the reason why. She said, “I wouldn’t want something bad to come back on me.” Alright. Well that strikes me as an odd reason not to kill babies, you know? It’s like, I’m not going to kill any babies, yet, you never know what’s going to happen to you if you do that. Kind of a karma thing, you know? What goes around comes around. Now, you know that strikes me, as I mentioned, a little bit unusual but I didn’t pursue that particular point. I went in a different direction.

I said, “Well, maybe you wouldn’t kill a baby but maybe we should stop other people from killing babies?” and she said, “Well I think people should have a choice.” Now what’s the choice we’re talking about here? The choice to by your own admission kill babies. Right, and that’s where I said to her, “You mean people should have a choice to kill babies?” and she said, “Well you know, I think all things should be taken into consideration.” I said, “Okay, what would be a legitimate consideration to make it okay to kill a baby?” and she immediately said, “Incest.”

Now, I want you to see what’s going on here. She’s trotting out all of the pro-choice slogans. Alright these turn out to be slogans not just for pro-choice but for baby-killing explicitly. And so the conversation is starting to sound a little bit weird. But she doesn’t see it because she’s not paying attention. She’s just satisfied with the slogans. This happens all the time on both sides of the aisle. People have their sloganeering way of dealing with particular issues and they drop these things out and they’re not listening to themselves. And they’re not thinking carefully about what’s going on.

So what I said to her, to kind of get her attention about this whole thing, I said, “Let me ask you a question. If I had a two-year-old standing next to me who had been conceived by incest then on your view I should be allowed to kill this child, is that right?” Ok now let me ask you, is that a fair application of her own view? I think it is. In fact, she thought it was too. She didn’t object. And by the way, if it wasn’t a fair application, I’m giving her an opportunity to correct me, because I don’t want to misrepresent her view. But it wasn’t a misrepresentation. It was a fair application of her view. And she thought about it for a moment.

She paused. I don’t know maybe that’s where I put the stone in her shoe. It’s hard to tell in these things. But in any event, she paused for a moment then finally she said, about killing the two-year-old, “I’d have mixed feelings about it.” And inside I think, I hope so! At least mixed. Now notice, she meant this as a concession. It’s like you got a point there. I noticed also that the line is growing behind me, so now I realize that I’m interfering with her work product and I also realized that my opportunity as an ambassador for Christ now come to an end.

Now had I been of a different persuasion, the idea that you always got to get to the Gospel in every conversation. Go for the gold. Swing for the fences. I couldn’t stop there. I’d have to keep going. I’d have to tell the people hold on folks I’m not done yet. I haven’t got to the Gospel yet. You know, sit down maybe learn something. But I wasn’t under that pressure. I know that God gives us little windows of opportunity and we make the best of those windows of opportunity and then we move on and trust that person to the Lord. For those moments, it was my task. But it’s God’s problem.

Let me say that again. It was my task but it’s God’s problem. He’s in control and I could finish up there. Let her get on with her work. Move ahead. Pray for this young lady and entrust her to the Lord. I want you to know something about this conversation and maybe you already noticed it. In this conversation, I used nine different questions. I use questions to initiate the conversation. I asked about her jewelry. I used questions to gather more information about her point of view. I used questions even to exploit a weakness or flaw that I thought I saw in her point of view. And that was the illustration about the two-year-old. And in the process, well, I used to say she was doing all the work because I wasn’t doing any work, I was just having a conversation. I was relaxed, I was cool, calm, and collected.

But, I realize now, that she wasn’t doing any work either. She was relaxed, cool, calm, and, collected. We were just having a friendly conversation. And that’s exactly the way I want it. There were no lines drawn in the sand. We weren’t guarding turf or anything like that. We weren’t fighting. We were just talking. And this is the power of using a tactical approach.