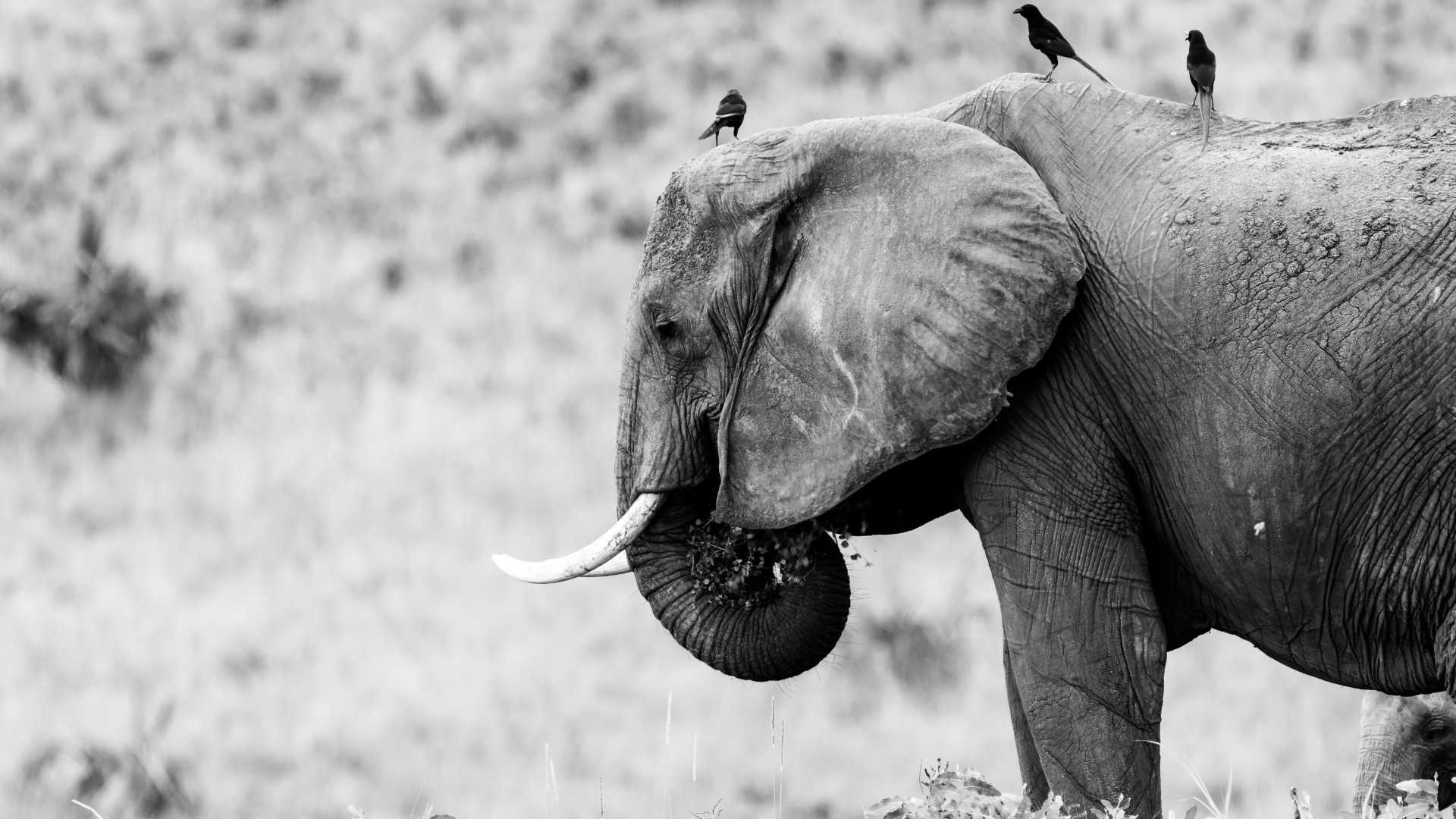 The ancient fable of the blind men and the elephant is often used to illustrate the fact that every faith represents just one part of the larger truth about God. However, the attempt is doomed before it gets started. Here’s why...

In the children’s book, The Blind Men and the Elephant, Lillian Quigley retells the ancient fable of six blind men who visit the palace of the Rajah and encounter an elephant for the first time. As each touches the animal with his hands, he announces his discoveries.

An argument ensued, each blind man thinking his own perception of the elephant was the correct one. The Rajah, awakened by the commotion, called out from the balcony. “The elephant is a big animal,” he said. “Each man touched only one part. You must put all the parts together to find out what an elephant is like.”

Enlightened by the Rajah’s wisdom, the blind men reached agreement. “Each one of us knows only a part. To find out the whole truth we must put all the parts together.”

This fable is often used to illustrate one of two points. The religious application holds that every faith represents just one part of a larger truth about God. Each has only a piece of the truth, ultimately leading to God by different routes. Advocates of Eastern religions are fond of using the parable in this way.

The second application is used by skeptics who hold that cultural biases have so seriously blinded us that we can never know the true nature of things. This view, de rigueur in the university, is called post-modernism.

This skepticism holds for all areas of truth, including the rational, the religious, and the moral. In Folkways, a classic presentation of cultural relativism, anthropologist William Graham Sumner argues that morality is not objective in any sense. “Every attempt to win an outside standpoint from which to reduce the whole to an absolute philosophy of truth and right, based on an unalterable principle, is delusion,” he states.2

Sumner is making a very strong assertion about knowledge. He says that all claims to know objective truth are false because each of us is imprisoned in his own culture, incapable of seeing beyond the limits of his own biases. Sumner concludes, therefore, that truth is relative to culture and that no objective standard exists.

There are three serious problems with the elephant, but first a procedural concern.

The parable of the blind men and the elephant is a clear and powerful illustration, but an illustration is a mere point of view in more vivid terms. It is not an argument, but a well-articulated assertion. It doesn’t prove anything in itself. It doesn’t make one’s point valid. It only makes it clear.

Proving the point is another matter. It requires evidence and justification. Given the illustration of the blind men and the elephant, why should anyone believe this parable actually describes the way things really are?

I’ll give you three reasons I think the illustration fails at what it attempts.

The first serious limitation is that even though the men are blind, the elephant isn’t necessarily mute. This is a factor the illustration doesn’t allow for: What if the elephant speaks?

The claim of Christianity is that man doesn’t learn about God by groping. Instead, discovery is through God’s own self-disclosure. He is not passive and silent, leaving us to guess about His nature. God tells us what He is like and what He wants.

If God speaks, this changes everything. All contrary opinions are silenced, all conjectures are put to rest. God has made Himself known, giving us a standard by which to measure all other religious claims. The parable of the blind men does not take this possibility into account. Yet three of the world’s great religions—Christianity, Judaism, and Islam—make this claim.

There is a second problem with the parable. It presumes that Christians reject pluralism because they lack exposure to other beliefs, much as the blind men erred because each explored only a part of the elephant. Had they searched more completely, they would have seen their error. Christians are just uninformed.

This is not the case, though. Christians reject pluralism, in part, because defining elements of different religions contradict each other. It’s not an inductive problem of discovery; it’s a problem of coherence.

Judaism teaches Jesus is not the Messiah. Christianity teaches He is. Jesus either is the Messiah or He’s not. Both groups can’t be right. The notion that Christianity and Judaism are somehow equally true is contradictory, like square circles.

What if the elephant in the parable was a miniature, so small the blind man could close his hand and completely encompass the elephant? If another then claimed, “The elephant is bigger than a house,” the first would be correct to disagree. Why? Because an elephant can’t be small enough to fit into one’s hand and also be as big as a house at the same time.

No possible future discovery is going to change the fact that religious claims cannot be harmonized. Rather, exploration complicates the issue. The more one knows about the core beliefs of various faiths, the more complex the problem of harmonizing becomes.

Appealing to the ubiquity of something like the “golden rule” is no help. It is a moral action guide that says almost nothing about any religion’s fundamental understanding of the shape of the world. Profound contradictions between foundational beliefs are not removed by pointing out shared moral proverbs.

Contradictory claims can’t be simultaneously true. This has nothing to do with further discovery. Religious pluralism is false on deductive grounds, not inductive.

The third objection is the most serious. The application of this parable to issues of truth is doomed before it gets started. The view commits suicide; it is self-refuting. Here’s how.

There’s only one way to know our cultural or religious biases blind us to the larger truth that all religions lead to God. Someone who sees clearly without bias must tell us so. This parable, though, teaches that such objectivity is impossible.

For example, in order for William Graham Sumner to conclude that all moral claims are an illusion, he must first escape the illusion himself. He must have a full and accurate view of the entire picture—just as the king had of the blind men and the elephant from his balcony. The Rajah was in a position of privileged access to the truth. Because he could see clearly, he was able to correct those who were blind.

Such a privileged view, though, is precisely what advocates of both religious pluralism and the radical skepticism of post-modernism deny. Completely objective assessments are illusions, they claim. The truth lies in some combination of opinions or, for the more skeptical, is out of reach for any of us. This is precisely the kind of thing, though, the parable does not allow one to say.

The skeptical view itself is a claim meant to be understood as an objective and true assessment of the world. It’s as if one said, “Each of us is blind,” and then added, “but I’ll tell you what the world really looks like.” This is a clear contradiction.

The problem becomes obvious by offering this challenge. Ask, “Where would you be in the illustration? When you apply this parable to the issue of truth, are you like one of the blind men or are you like the king?”

This dilemma is unsolvable. If the story-teller is like one of the six who can’t see—if he is one of the blind men groping around—how does he know everyone else is blind and has only a portion of the truth? On the other hand, if he fancies himself in the position of the king, how is it that he alone escapes the illusion that blinds the rest of us?

At best, this parable—if it were accurate—might justify agnosticism, not religious pluralism. All one could really say is that it may be the case we’re all groping about with no one in full possession of the truth—but this can’t be known for sure.

If everyone truly is blind, then no one can know if he or anyone else is mistaken. Only someone who knows the whole truth can identify another on the fringes of it. In this story, only the king can do that—no one else.

The most ironic turn of all is that the parable of the six blind men and the elephant, to a great degree, is an accurate picture of reality. It’s just been misapplied.

We are like blind men, fumbling around in the world searching for answers to life’s deepest questions. From time to time, we seem to stumble upon some things that are true, but we’re often confused and mistaken, just as the blind men were.

How do I know this? Because the King has spoken. He is above, instructing us, advising us of our mistakes, and correcting our error. The real question is: Will we listen?

Is Jesus the Only Way?

Is One Way the Only Way?