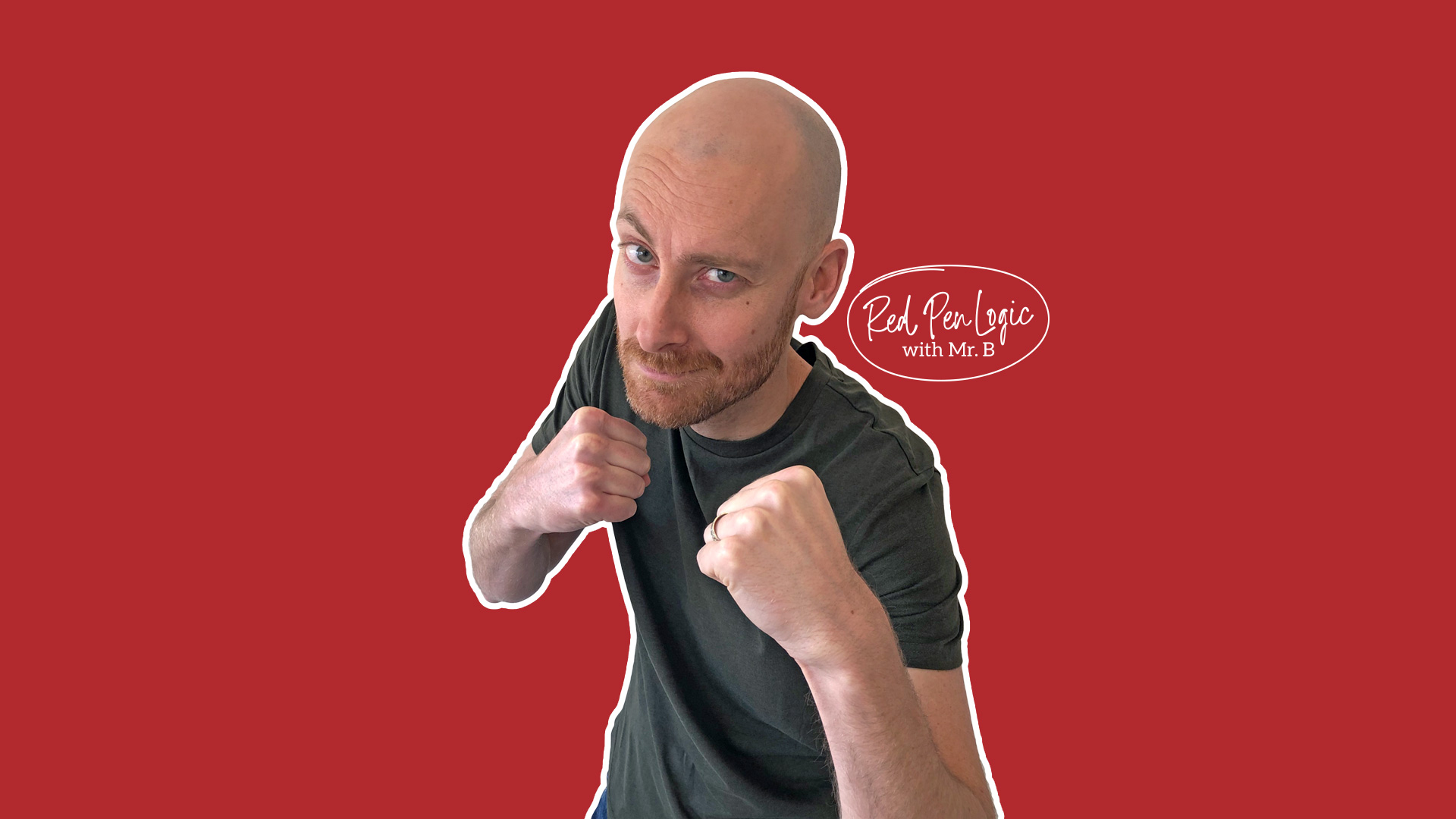 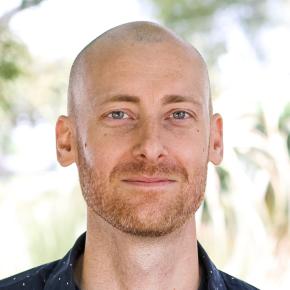 Mr. B vs. The Bible Thinker: Responding to Atheist Fallacies 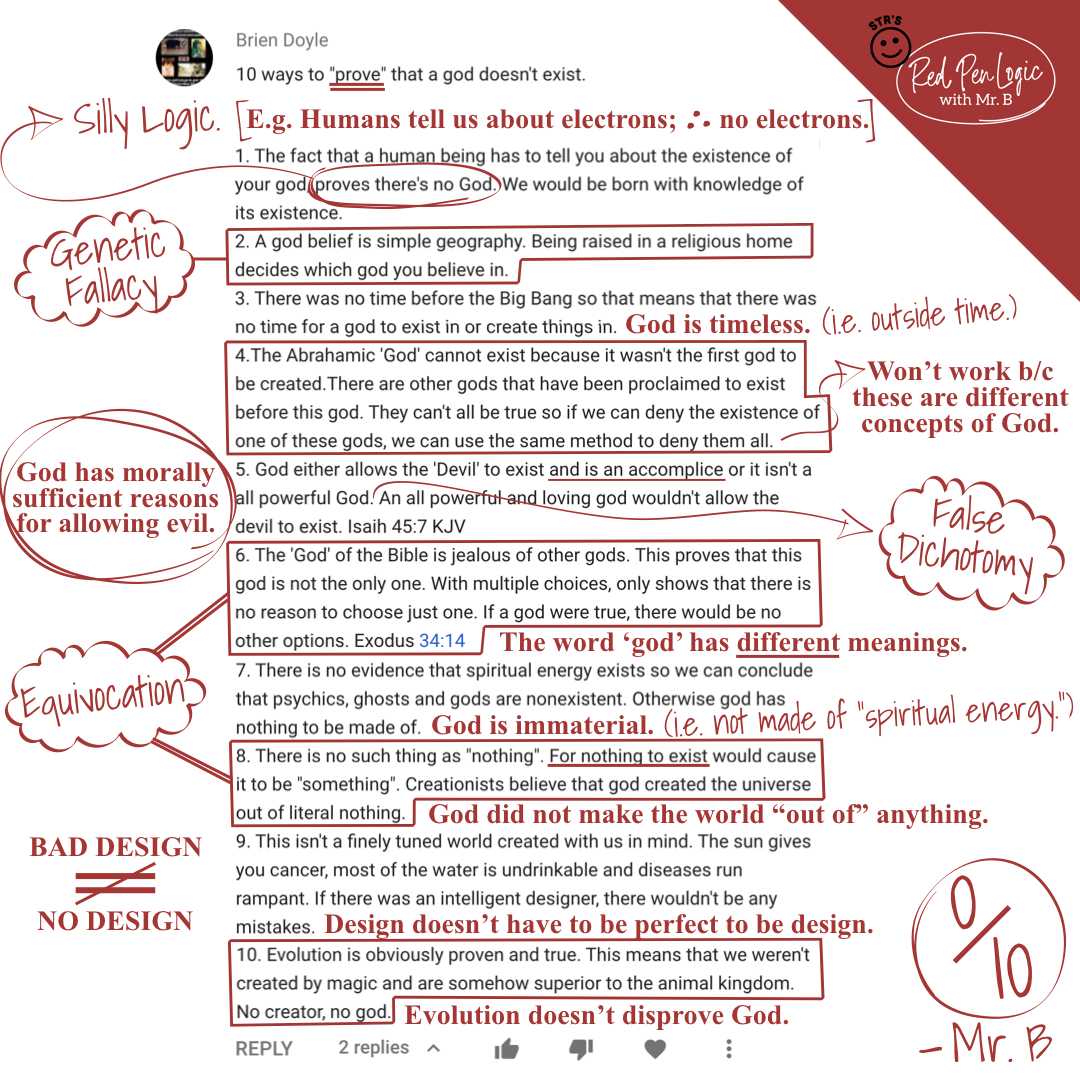 So, a few days ago I was scrolling through the comments sections on the Red Pen Logic YouTube channel, and I came across something that left me speechless. The comment claimed to offer “10 Ways to ‘Prove’ God Doesn’t Exist.”

This comment also caught the attention of my friend Mike Winger. For fun, I challenged Mr. Winger to respond to all 10 challenges...in less than 3 minutes. But why should Mike get to have all the fun? So, because I’m a good sport, I decided to show Winger how it’s done. Game on, Wing-man!

To see how Mike Winger did with these same 10 “proofs,” click here.

This is gonna be a good one. So, a few days ago, I’m scrolling through the comments section of this channel, and I came across something that left me speechless. At first, I wasn’t sure if this was serious or if it was just a joke. The comment claimed to offer 10 ways to prove that God doesn’t exist. This comment also caught the attention of my friend, Mike Winger, who has a teeny tiny YouTube channel called The Bible Thinker. You probably haven’t heard of it.

For fun, I challenged Winger to respond to all 10 challenges in less than two minutes. Mike said, “Under two minutes! That’s 12 seconds each. I don’t know if I can do that.”

But why should Mike get to have all the fun? So, because I’m a good sport, I decided to show Winger how it’s done. It’s time to Make mike my wing-man.

This is Red Pen Logic with Mr. B where we help you assess bad thinking by using good thinking. And we have way too much fun while we’re doing it.

Today’s challenge comes courtesy of Brian Doyle. He offers 10 ways to prove that God doesn’t exist. Let’s see what he’s got. Video guy, please put three minutes on the clock. And let’s include a fallacy counter just because.

Proof number one: “The fact that a human being has to tell you about the existence of your God proves there’s no God. We would be born with knowledge of its existence.”

Proof number two: “A God belief is simple geography. Being raised in a Christian home decides which God you believe in.”

This is a textbook example of the genetic fallacy. You cannot invalidate a belief by showing how someone came to hold that belief. So, this proof is about God belief, not about whether or not God exists. Put another fallacy on the board. So much for proof number two.

This challenge mistakenly assumes that God is necessarily a temporal being, that he must exist and act in time. But Christians have traditionally held that God is a timeless being, outside of time, prior to creation. So, there’s no proof here. Just a straw man fallacy.

Proof number four: “The Abrahamic God cannot exist because it wasn’t the first God to be created. There are other gods that have been proclaimed to exist before this God. They can’t all be true. So, if we can deny the existence of one of these gods, we can use the same method to deny them all.”

If this is a good argument against God, then it’s also a good argument against science since older false concepts are often replaced by newer true concepts. On Doyle’s logic, since the older geocentric view is false, we can just deny the newer heliocentric view by the same method. Of course, this is silly. We should weigh the evidence for each theory and for each god. Another non-sequitur on the board.

Doyle sets up a false dilemma. It’s not an either-or. There’s another option. God is all-powerful and all-loving, and God allows the devil to exist because he has good reason to do so. Which is why philosophically trained atheists have largely abandoned this proof. Fallacy: false dilemma.

Proof number six: “The God of the Bible is jealous of other gods. This proves that this God is not the only God. With multiple choices, only shows that there is no reason to choose just one. If a God were true, there would be no other options. Exodus 34:14.”

Proof number seven: “There is no evidence that spiritual energy exists, so we can conclude that psychics, ghosts, and gods are non-existent. Otherwise, God has nothing to be made of.”

Not this again. An immaterial being, by definition, is not made of material. I’m not going too quickly here, am I? God is not made of anything. God is spirit. God is spirit, but he’s not made of spiritual energy. He’s immaterial, so this is a straw man. But Doyle might also be begging the question by assuming materialism—that matter and energy are all that exist.

Proof number eight: “There is no such thing as nothing. For nothing to exist...

...would cause it to be something creationists believe, that God created the universe out of literal nothing.”

This is an equivocation of the word “nothing.” By “nothing” we mean no thing. That is, God didn’t make the universe out of anything. We certainly do not believe that God created the universe out of something that’s called nothing. So, there’s no thing here that disproves God. See what I did there?

Proof number nine: “This isn’t a finely tuned world created with us in mind. The sun gives you cancer, most of the water is undrinkable and diseases run rampant. If there was an intelligent designer, there wouldn’t be any mistakes.”

First, just because you can’t drink the ocean or antifreeze doesn’t mean they’re not designed. They’re just designed for another purpose. Second, something doesn’t have to be perfectly designed in order to be intelligently designed. Third, imperfect design is perfectly consistent with intelligent design in a broken world. Number nine offers another non-sequitur.

Proof number 10: “Evolution is obviously proven and true. This means that we weren’t created by magic and are somehow superior to the animal kingdom. No creator, no God.”

Biological evolution, even if true, has nothing to do with the existence of God. It has to do with God’s alleged role in biology. That’s all. If Darwin was right, atheists can still be wrong, as shown by a large number of theistic evolutionists. So, this is another non-sequitur. Despite what you’ve been told, evolution doesn’t disprove God.

Stop the clock. Boom. That is how it’s done, Mike Winger.

Well, there you have it, folks. We did ten quick answers to ten bad arguments. But here’s what I want you to do. I want you to head over to Mike Winger’s YouTube channel, The Bible Thinker.

The link is in the description. Go over there, see how he did with the same 10 questions. Until next time.