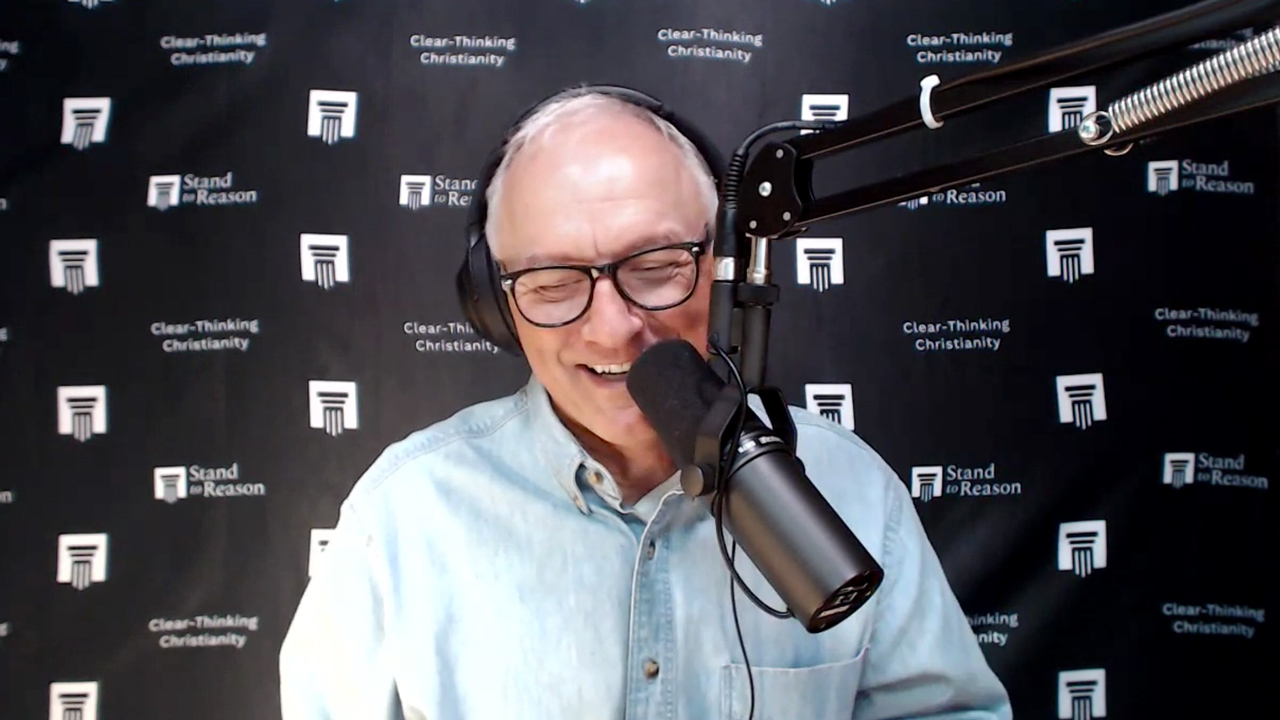 How Can We Stay Motivated When Things Look Bleak?

If you feel like Christians are losing the battle, you’re not alone. But Greg Koukl and Jon Noyes remind us that we’re “more than conquerors through him who loved us” (Romans 8:37).

Caller: I was listening to your podcast, and it was a very good summary. In fact, your newsletter is going to come out dealing with, I guess, the subversion of truth—how we’re being silenced and how things are being twisted. That was like the worst halftime coaching. They’ve got everybody. They’ve got Google. They’ve got the universities, the schools.

Greg: You’re right. This can be very, not only unsettling, but discouraging.

Caller: So, my question was, I think we’re probably going to lose this battle, but you know we definitely win the war, and what’s the game plan look like in the meantime? I mean, there’s going to be a lot of casualties. Two of my three grown children are “woke.” I mean, we have to be very careful of how we talk, right? I speak with them, but you know, I still try to throw some truth in there, just to put more of a pebble in there.

Greg: You’re a dad. Dads are better at rocks than pebbles.

Caller: So, I guess I wanted your take, because you see it even more so than me. My faith is strong, and in many ways it’s much stronger. I’m reading through the Bible and, in fact, I got that book Valley of Vision that you talked about. I really love that too. I think it is more effective if we aren’t a sad sack or finger wagging.

Greg: Well, let me respond to it quickly because I think I know where you’re going. We got a pretty good picture, Jon and I both do, and before I pitch it over to Jon, I just want to make an observation. There’s a certain sense in which all of this going on confirms the validity and truthfulness of my own worldview, because what’s going on is so ridiculously upside down—where black is white and white is black, and up is down and down is up, and good is bad and bad is good—that the only persons that can affirm what’s going on are people that are completely blinded, and this is exactly what Scripture says the Devil has done to the world. It’s a grave situation, I admit. Still, at the same time, it verifies for me the truthfulness of my worldview. It doesn’t undercut it. It raises concerns for my family, and for the future, and for the church, and Christians that are being duped by the language and by the power moves and by the progressives and the wolves in our midst, but it does serve to confirm my convictions, because it fits perfectly into our understanding of a Christian view of reality. That’s my first thought.

Jon: I think that’s a great observation, and also a struggle, I think, many listeners are probably wrestling with right now. I love Romans 8, specifically Romans 8:37, where we’re told that we’re conquerors. We’re more than conquerors through him who loved us, and that comes on the heel of Paul talking about the trials and the suffering that have to take place before our glory.

Ultimately, it’s in the suffering, right? In suffering is affirmation that our worldview is true. And if our worldview is true, the promises of God are true. So, that’s where I run, and I hold really fast to the promises of God and my identity of who I am in that. I’m able to face the trials and the tribulations knowing who God is, knowing my worldview is true, and knowing that the trials and the tribulations that are here aren’t for naught, that actually the things that we’re going through actually are doing something right.

These are momentary, light afflictions producing in us an eternal weight of glory far beyond all comparison. There’s something that is being produced in you and in me through these trials that otherwise would not be there, and I think it’s important for us to understand that it’s also important, Paul tells us, that the trials are producing patience in us, and that patience is producing proven character, and that proven character, a hope, and then he says a hope that will not disappoint. So, I hold on to these things in the midst of it.

Greg: I do not view my responsibility to the world to be one of persuading the world or even changing the world. I want to qualify this, because I don’t want it to be misunderstood. Changing the world and persuading people ultimately are not in my control. It doesn’t mean I can’t have a salutary impact on the way people think and on the way the world is, but the ultimate end is not within my control. What is in my control is what I choose to do in response. So, what I can do, say, with regards to the gospel and communicating that, I can communicate the truth as graciously and persuasively and as accurately as possible, but there’s no guarantee that the people are going to be persuaded. It’s not my goal to persuade them. It’s my goal to do what I just said, and it’s God’s responsibility to do the persuading. So, if I’m a Jeremiah-type speaking the truth accurately and faithfully, and nobody listens, I can still look at my own behavior and say, “You have succeeded in what you sought to do. You were faithful to the audience of one to do what was right.” Whether or not it had a long-term impact on the individual or the culture is not under my control. That is not my responsibility.

So, part of the way I approach this is, I say, “What can I do that is within my power to accomplish, to succeed in doing? My role is to be faithful. God’s role is to make a difference. That helps me there, as a first principle. So, if nobody listens to me, I’m not surprised, and it’s not the end of the world, because that wasn’t my goal anyway. If what I am doing is being faithful to the Lord in the way I communicate and in what I communicate, then I have accomplished my goal, and I have been successful, if you want to use that language.

I have said multiple times in the last year or so that we are not limited to our four score and ten. Many people, when they get to be my age, 71, they’re looking over their shoulder because there’s not much of their life left compared to what’s passed, and they haven’t accomplished what they wanted to accomplish. There’s not enough life left to do that, and so it’s deeply disappointing for them. But for me, I’m not measuring this four score and ten. I’m thinking in a much broader sense, and if it turns out that I’m laboring away being faithful in the way that I just described, I am storing—I’m making deposits. It’s just like you say. I really worked hard this week, but I’m putting aside all of my 401k so I can cash it in later. I’m not going to enjoy it now, but that’s okay because I know I am going to cash it in later. Something along that line. It’s kind of, maybe, a weak parallel, but it gives you a sense. I know that I am going to cash all of this in later. I know that because I have a promise. I have a hope, as Jon said, that will not disappoint because God is the one who secures that. And so, when I read 2 Corinthians 4:16–18, what Jon just cited, that there’s momentary light affliction that is producing for me—note, the verb is really important—an eternal weight of glory. I’m making a deposit in the bank. So, this period of time, it’s like you got to work a week, five days a week. Why? So you can enjoy the weekend. So, this is a work week for me, and fighting all these battles, this is just part of the work week, and the weekend isn’t a weekend. The weekend is the rest of eternity. It’s a long weekend far beyond all comparison.

I don’t know what’s going to happen next year or next week. For goodness sake, it does look bleak from a human perspective, but I know the gates of Hell will not prevail against Christ’s church, and we have 2,000 years of history to demonstrate that’s the case.

Caller: It really validates the Bible so much more, and I think I’m about five years younger than you, but we grew up in a very cushy time, and to see it kind of going over a cliff is tough for us, but it’s really validating the Bible more and more. Look at Paul’s life. You’re reading the Old Testament, you say, oh this will never happen. It’s happening. So, it just makes it so much more powerful to me, and, you know, at some point, I think people are going to be woke the other way, as well—like, hey, wait a minute. This doesn’t make sense. And then, when it doesn’t, say, “Hey, I remember this guy saying this about, you know, a Christian point of view that seems to make sense.”

This is our moment because it is so crazy. And to keep our head, when everyone else is losing theirs, because we’re grounded in the truth. People are hungry for that. I mean, deep down inside, I think, at least for me, even though it stings sometimes, I want the truth, even if it’s truth against the church or whatever...or, you know, let’s discover it. I’m not going to silence you. I’m going to, you know, look it up. I’m going to reference. I’m going to do the leg work. But, you know, I want the truth because I don’t want to waste my time.

Greg: I just think you just touched on something. I’ll make this my final remark to you. But there is a sense in which that, even though we’ve had a cushy life up until now, Americans in general, with regards to these issues, it is time to gird our loins. It is time to, as Paul put it, act like men, and I don’t mean sexist. I mean, rise to the occasion with strength, to be strong, to be on the alert. These are all biblical exhortations, and this is the time to do that, and those who are Christians need to be willing to say, “I’m going to stand in the gap and take whatever the world is going to dish out to me because this is temporary. It is just temporary, when eternity is forever. That’s the definition of the word.