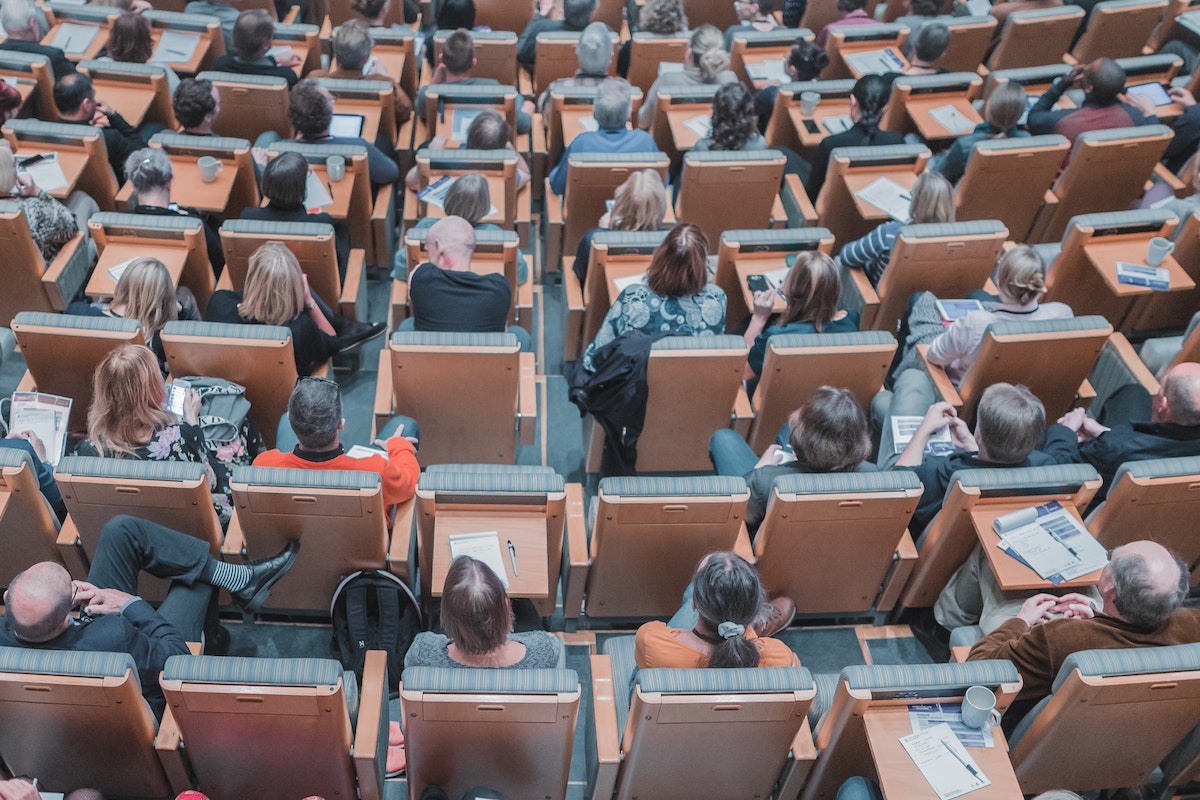 Do Students Care about the Reasons for Christianity?

Do apologetics matter to young people today, who base their convictions on feelings?

One of the things that was asked of me about my own perspective doing apologetics, and especially doing it with youth, was a claim that came up from a leader of—I’m not going to say the ministry because I don’t want to embarrass them—but a leader of a youth ministry. The national leader for a youth ministry, a well-known youth ministry in England. It’s actually a worldwide presence, but he was the England leader of the group. And the point about apologetics came up, which my friends were deeply committed to, had read the Tactics book, were happy that I made my contribution to their organization the week before in a conference, and in fact, want me to do some work with their local churches in Atlanta and can see the significance and importance of apologetics, in their opinion, for youth and want to see more happening in their own churches.

But this particular leader of youth in Britain said, “Don’t waste your time. The young people don’t care about this kind of thing. They are led by their feelings, not by their minds.” So, I was asked my opinion about that statement.

Well, let me tell you something. It’s true in one sense, or at least half of that is true. They are led by their feelings, largely, and not by their minds. They’re socialized to believe what they believe, and when they’re in Christian circles, socialized in Christianity and having their feelings reinforced regarding Christian things, then they’re going to believe Christianity. When they leave, however, then those feelings can change. And we know why the feelings change because we’ve seen the exit polls when Christians—I should say, former Christians—that as young people have left the faith, and you ask them why, it’s because they found a new group of people who think a different way and persuaded them that Christianity wasn’t right. Now they have a new set of feelings. But why do they have a new set of feelings? Because they’ve been persuaded to another view, and there’s some social pressure that’s involved too.

And the social pressure works really well when you don’t have any good reasons to stick with those old-fashioned beliefs and those old-fashioned ways of life. And when they’re polled, the students are quite candid: “We left Christianity because we had no good reasons to stay in Christianity. It didn’t make any sense to us.” What made sense is what their new group was telling them: “Be kind, be loving, be tolerant, be accepting, don’t be a bigot.” And it’s easy for our students who are led by their feelings to be taken down by those approaches if they have no good reasons.

Now, when they have good reasons not to buy into that notion, well, that makes a big difference. So, turns out apologetics do matter for the youth even if feelings play a huge role in their convictions. And even when they don’t want it, they still need it. And so, if you are a leader in a Christian group, Christian organization, then lead, don’t follow. “Our kids don’t want this kind of stuff. They’re just into feelings” Well, we have a way of changing their feelings at Stand to Reason. We beat them up. I mean, after a fashion. That is, we send one of our staffers in as an atheist into their youth groups—they don’t know he’s an atheist, but they think he’s a doctor from a local college or university—and then they give their atheist talk and answer questions, and these guys are taken down. I want to tell you something: That changes their motivation. It certainly changes their feelings. And this kind of role-play thing can be very powerful to help people to see what they don’t know.

Now, these kids are going to encounter this sooner or later—a lot sooner than most parents think. And they will be amazed at how quickly years of religious education can evaporate, sometimes in a matter of months. Their good Christian kids go off to college, they come back for Thanksgiving, and they’re atheists. This happens all the time. Why? Because someone who they respected as smart told them Christianity was dumb, and they believed him. So, do these things matter to kids? Yes, they do.

And our experience has been, from the turnout—say, for example, our [Reality] Apologetics events and also the evidence of Hume Lake. We’ve been invited for the last some four or five years to do a session every single week up there, so we get a shot, at least, at these kids if they will come to our session, but there’s competition. There’s like three or four different speakers that they can choose. And I’m just saying that when our speakers come out, and then they make their pitch before the group with the other speakers as to what they’ll be doing in their session, and they’re not trying to put down the other speakers or, you know, put themselves up in an inappropriate way. They’re just saying, “We’re going to cover these things,” they’re apologetic kinds of things, and they get mobbed out. Standing room only. And the other speakers end up with the scraps. Why? Because these kids want answers.

I was speaking with a brother just a week ago Sunday in England who was raised a Christian and now is struggling with his own convictions, his own confidence. And, in fact, his father was in ministry, and he was a smart guy, and he had questions like anybody else. But what he got mostly was, “Hey, just have faith.” And now he’s struggling because he didn’t get answers. Well, I’m going to tell you something. There are answers, and there’s no good reason that we shouldn’t be giving our kids the answers. And if the answer is, “Well, we don’t know the answers,” well, there are plenty of people that can help you with that. We’re one of them. Str.org. Thousands of pages of information. Literally thousands of pages, and I mean literally literally. We have hundreds of video vignettes, short four, five, six-minute video responses to challenges, or questions, or issues. I just did one, two, three, four, five today. I had a video session where they’ll be stretched out over the next few weeks because they’re video podcasts. You can sign up for those two in addition to this podcast. So, these are things that we make available, and we’re not the only ones. There are lots of other organizations out there that are doing good work and putting stuff out on the web for free. We got answers to these questions.

In fact, we’ve got a huge, deep bench. Our people have great answers, and there’s nothing that has been brought up as a challenge to Christianity that intelligent, thoughtful, gracious followers of Christ have not effectively responded to. Now, you may not know what they’ve responded to, but it’s out there. It isn’t like we’ve got a whole bunch of questions we haven’t been able to answer. Obviously, theologically there are some things that are mysteries, but theological issues are not the ones that people are bringing up. Occasionally, they come up. Most of them, they’re just the standard thing. In fact, that was one of the questions that was put to me: What are the standard kinds of challenges that young people are going to encounter? And you know what? He asked me for ten. I couldn’t give him ten. There aren’t that many. I guess if I strained a bit, I can find some things. But there’s probably five or six main things.

I mean, the problem of evil, of course. The reality of truth—that we can actually know something. The reliability of the Bible, both historically and in terms of its transmission. And how many times it’s been copied and recopied, has that changed it? That’s an issue that comes up. The person of Jesus. Did I mention evil and suffering? I think I mentioned that.

Now, that may surprise you, but it shouldn’t, because the problem of evil and suffering is not a Christian problem. It’s a human problem. Human beings across the world, spanning all periods of time, have raised this issue and offered this challenge: what’s wrong with the world? Why is there so much evil and suffering? Everybody knows something’s wrong. The world is broken, and that means that the real issue is not whether Christians answer it; it’s who can give an answer that makes sense out of the problem to begin with and can also give us the resources to answer. That’s how I approach this problem when I lecture on this. Even the atheist has to answer the problem of evil.

Now, if he’s an atheist because of the problem of evil, I get it. But he hasn’t gotten away from the problem. He hasn’t solved anything. He says, “I can’t believe in God because there’s so much evil in the world.” All right, I get that. So, God’s out of the picture. But guess what? You still got evil in the world. So, you tell me, atheist—as a materialist, as a naturalist, as a physicalist—now, why is there so much evil in the world? And don’t tell me it’s an illusion because just a few minutes ago you were barking pretty loudly about it as if it were real, so we all have to answer this question, not just the Christian theists.

Well, these are the issues, and there’s now a new category of sexual issue—the homosexuality/transgender issue. But most of this is just meant to show that Christians are mean, and God is nasty, and so that’s the broader issue because we don’t go along with all of this stuff, and well, we have an answer for that. We can tell you why we don’t go along with that, and we can also tell you why this isn’t because we’re mean and God’s nasty.

One other thing I didn’t mention was the religious pluralism issue: Why is Jesus the only way of salvation? But what have I given you? Just about six main things. Person of Christ, evil and suffering, reliability of the Bible, truth, relativism, what’s that? Five? Why Jesus is the only way. Six. That’s kind of a relativistic issue, too. And then it kind of falls off after that.

Now, here’s what this means, friends. It means that if you can master—more or less master—six issues, you’ve got them covered. You’re able to stand tall and demonstrate why Christianity is worth thinking about over and above all these other points of view. I guess Islam should be thrown in there too, maybe. Let’s make that seven because it’s just a growing problem, but it is not an overwhelming task. It isn’t a task that we cannot resolve, that we cannot answer, that we cannot speak to, okay? It’s something that can be managed by Christians, and that’s why Stand to Reason is here. Confidence for every Christian, clear-thinking for every question or challenge, and grace in every encounter. It’s equipping you, essentially, to be capable.