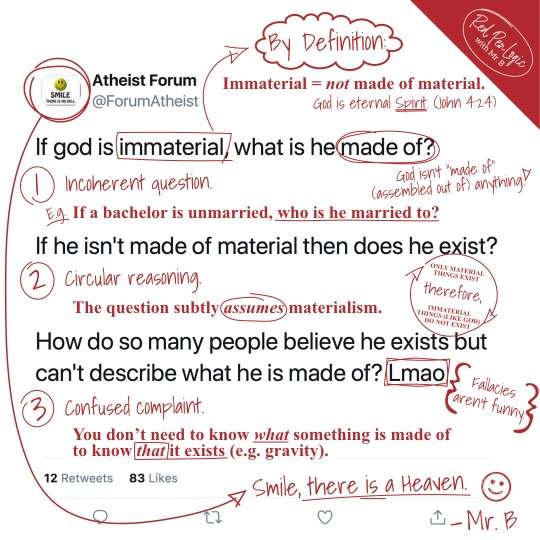 Questions are a legitimate way to get people to think. But if questions subtly create confusion, fallacy, or error, they only serve to conceal the truth rather than reveal the truth.

Atheist Forum provides three questions designed to raise doubt about the existence of God. But, to get the answers they want, they rely on an incoherent question (strike one), circular reasoning (strike two), and a confused complaint (strike three).

Incoherent questions, circular reasoning, confused complaints—this tweet has them all.

I’m Tim Barnett, and today we’re applying some Red Pen Logic to a tweet from Atheist Forum. Class is in session.

This is Red Pen Logic with Mr. B, where we try to assess bad thinking by using good thinking. Plus, we try to have some fun in the process. In today’s example, Atheist Forum offers a series of questions to get you to doubt the existence of God. Questions are a legitimate way to get people to think, but if questions subtly create confusion, fallacy, and error, they only serve to conceal truth rather than reveal truth.

Atheist Forum provides three questions to challenge the existence of God. First, “If God is immaterial, what is he made of?” Second, “If he isn’t material then does he exist?” Third, “How do so many people believe he exists but can’t describe what he’s made of?” Atheist Forum closes with a classy “Lmao,” laughing my—well, you get the idea. Presumably, belief in God is laughable because any thoughtful person following this atheist line of reasoning should see how foolishly funny it is to believe in an immaterial God. All right, it’s time to pull out the red pen and take this from the top.

Atheist Forum’s first question sounds strange because it contains a fundamental flaw. It’s an incoherent question. That means it doesn’t make any sense. An immaterial being, by definition, is not made of material. I’m not going too quickly here, am I? God is not made of anything. God is spirit. He has no mass, no form, no pieces that need to be put together. He’s not extended in space. He’s not made of God particles or spaghetti. Yeah, I’m talking to you, Pastafarians.

The question “If God is immaterial, what is He made of?” is like asking, “If a bachelor is unmarried, who is he married to?” A bachelor, by definition, is not married to anyone. So the first question seems to be based on a confusion about God, who is, by definition, immaterial and not assembled out of anything.

The only way Atheist Forum gets the answer it wants is if it subtly starts with the answer it wants. Only material things exist. Of course they’re gonna say that God doesn’t exist, because their materialism already dictates that He can’t exist. But that’s presuming what needs to be proved. That’s called circular reasoning. Incidentally, philosophers (and atheists, by the way) routinely speak of real things that are not made of material like reasoning, and arguments, and logical fallacies.

Finally, Atheist Forum asks, “How do so many people believe that he exists but can’t describe what he’s made of?” This is a confused complaint. Here’s why: You don’t need to know what something is made of to know that it exists. We know that gravity exists even if we don’t know what it is.

So what have we learned? First, Christianity holds that God is not made of anything. Instead, He is an immaterial spirit. Therefore, asking, “What is God made of?” is an incoherent question. It’s kind of like saying the number four is immaterial and then asking, “What’s it made of?”

Second, if God is, by definition, immaterial, and you start by assuming that only material things exist, of course you’re gonna conclude that there is no God. But that’s because your starting place disqualifies God from the beginning. This is circular reasoning, not careful thinking. This mistake is not surprising. Christian philosopher William Lane Craig says, “We are so schooled in materialism that we find it difficult to free ourselves from its assumption.” He’s right, and that’s what’s going on here.

Third, we don’t need to know what something is made of to know that it is real. Ironically, science works in the opposite direction. First it discovers that something is real, like gravity, and then it tries to describe what that thing is like. So Atheist Forum provides three questions designed to raise doubts about the existence of God. But to get the answers they want, they rely on [an] incoherent question (strike one), circular reasoning (strike two), and a confused complaint (strike three).