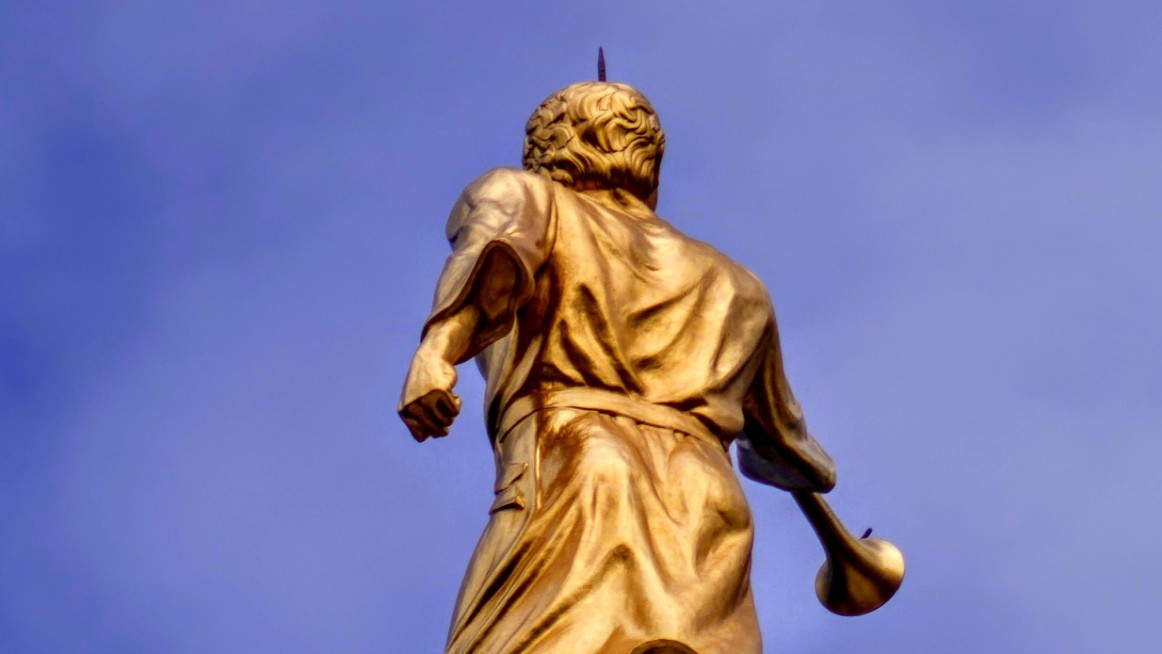 One thing you’ll discover as you’re talking with your Mormon (LDS) friends is that though we use the same terms, we often mean very different things. Mormons have different definitions of gospel, repentance, salvation, grace, Hell, and nearly every term you’ll be using in your conversation. If you fail to explicitly define your terms, you could easily leave the conversation thinking you’re both in complete agreement. (Ask, “What do you mean by that?” early and often!)

The term “God” is no exception to this. In fact, it’s the most foundational difference between Christian and LDS theology.

The key to understanding the god of Mormonism is the idea that he is the same species we are; we’re just in an earlier stage of development. Here’s a quote from Joseph Smith:

God himself was once as we are now, and is an exalted man, and sits enthroned in yonder heavens! That is the great secret. If the veil were rent today, and the great God who holds this world in its orbit, and who upholds all worlds and all things by His power, was to make himself visible - I say, if you were to see him today, you would see him like a man in form - like yourselves in all the person, image, and very form as a man; for Adam was created in the very fashion, image and likeness of God, and received instruction from, and walked, talked and conversed with Him, as one man talks and communes with another...

I am going to tell you how God came to be God. We have imagined and supposed that God was God from all eternity. I will refute that idea, and take away the veil, so that you may see...that he was once a man like us; yea, that God himself, the Father of us all, dwelt on an earth, the same as Jesus Christ Himself did...

According to official LDS doctrine,* Heavenly Father has not always been a god. He was once like us (some say he was a sinner, and some think he never sinned), but he followed a plan (just as we’re required to follow a plan) to reach godhood. (See here for more on how the LDS view of God is connected to their view of the gospel.) He has a physical body as we do and is not a tri-personal being; rather, the Father, Son, and Spirit are completely separate beings - three separate gods.

It’s helpful, when clarifying the differences between the LDS and Christian views of God with your LDS friends, to have a few verses ready to discuss.

Isaiah 43:10 says, “Before me there was no God formed, and there will be none after Me.” This verse is a problem for the Mormon understanding of the Father and the Son, let alone the gods that preceded the Father and the faithful Mormons who will be exalted to godhood in the future.

Isaiah 44:8 reiterates, “Is there any God besides Me, or is there any other Rock? I know of none.” Again, this contradicts the LDS view that the Father, the Son, and the Holy Spirit are three separate gods and that the Father himself has a god over him.

Psalm 90:2 speaks of God always being God: “Before the mountains were born or You gave birth to the earth and the world, even from everlasting to everlasting, You are God.”

1 Kings 8:27 contradicts the idea that God has a physical body: “But will God indeed dwell on the earth? Behold, heaven and the highest heaven cannot contain You, how much less this house which I have built!”

Besides biblical problems, the LDS conception of God also suffers from philosophical problems.

There can’t be an infinite regress of gods. You can’t have a god who has a father god, who has a father god, on and on, forever and ever. There has to be a first cause that is self-existent - uncaused by, and not contingent on, anything else. That cause is, by definition, greater than any god who was born as a man and became a god. Isn’t that first, uncaused, self-existent God the one we want to worship?

The moral law is greater than the LDS god. In LDS theology, God perfected himself by following moral rules (i.e., the “plan of salvation” provided by his god). Those rules didn’t come out of his character; rather, he conformed his character to those rules because those rules were greater than he was. So where did the moral law come from if all gods have been conforming themselves to it? Again, we’re back to the need for a self-existent being, out of whose very character came the moral law.

The LDS god is not infinitely perfect. Many Mormons believe all gods are still progressing - our god is farther along than we are, his god is more advanced than he is, etc. But if God is getting better, then he isn’t perfect now; and if he isn’t perfect now, then isn’t it possible for Him to make mistakes? How could we worship a god like that?

The Number One God

I want to worship the first and only true God, the triune Father, Son, and Holy Spirit eternally existing in love and fellowship, the God who was before all things and brought all things into existence, the God whose character is the foundation of the moral law, the infinite and eternally perfect God.

This story from Mormons in Transition haunts me:

Tim Schmall had a natural sense of the one and only sovereign God. He recalls being told when he was twelve or younger “that the God whom [they] had, according to LDS theology, is one of many gods.” Tim wrestled with this concept, then asked, “Who’s the number one God?” The answer he recalls receiving was, “We don’t know, so we don’t ask,” or, “There isn’t a number one, and if there is, it doesn’t matter. We don’t have anything to do with him.” Tim remembers being “really distraught and disappointed about it.” He recalls “going home and being afraid and upset and getting down on my knees to pray, sneaking a prayer: ’This prayer is to the number one God. I wish you could be my God.’”

There are Mormons out there today who secretly feel this same desire for “the number one God.” God may be drawing your own friend or family member to Himself! Tell them about the God you love.

*Don’t assume every Mormon you speak to will have the same views as the official doctrine of the LDS church. As with those in Christian churches, many in LDS churches are lacking theological knowledge and have picked up ideas from the culture. Make sure you ask questions to draw out and respond to their particular beliefs.

Ground Rules for Talking to Mormons